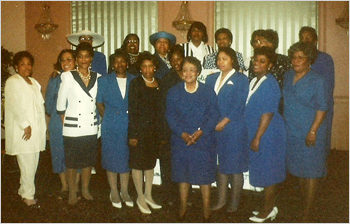 In the spring of 1981, Soror Vivien H. Hansbury invited a group of sorors to a meeting to discuss the feasibility of chartering a chapter in Montgomery County, PA. Assisting in this effort was Soror Alean E. Boyce. These women felt the true meaning of Sisterly Love should pervade amongst sorors. Ultimately, twenty sorors applied for a charter in Norristown, PA – and overcoming many obstacles – the application was approved.

Attendance at the reception included: sorors, Sigma brothers, representatives from all other black Greek-lettered organizations, the Inter-Greek Council of Metropolitan Philadelphia, and many friends.

Since its chartering, Kappa Omega Zeta Chapter has served as the host chapter for state and regional conferences, numerous Founders’ Day celebrations, and has won numerous awards on the local, state and national levels for its community service initiatives. Our chapter members have also held elected and appointed positions on the state, regional, and national levels of the Sorority.

On July 11, 1982, the Zeta Amicae and Archonette groups became official members of the extended Kappa Omega Zeta family. Our youngest members, the Pearlettes, were organized on November 14, 1991.